Consider a car runs a red light. When the vehicle collides with another car, is energy conserved? What about momentum? 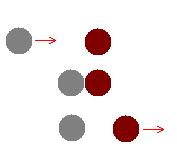 If an elastic collision were to occur (like two balls bouncing apart after impact), both momentum and kinetic energy are conserved. Almost no energy is lost to sound, heat, or deformation. The first rubber ball deforms, but then quickly bounces back to its former shape, and transfers almost all the kinetic energy to the second ball. Energy is only conserved if the restitution coefficient equals 1.

Momentum is conserved, while kinetic energy is not.