Consider a 65 kg motorcyclist goes down on the road and slides horizontally across the rough asphalt. After sliding 20 m, his speed slows down to 6 m/s. If the kinetic coefficient of friction between his protective body armor and the road is 0.4, what initial speed did he fall at?
Friction is working against the motorcyclist (slowing him down as he slides across the asphalt), so energy is not conserved:
$$$T_2+V_2=T_1+V_1+U_{1 \to 2}$$$
where $$T$$ is the kinetic energy, $$V$$ is the potential energy, and $$U$$ is the work done by non-conservative forces in moving between state 1 and state 2. It’s important to track the algebraic sign of the work term. If the forces serve to increase the energy of the system, then work is positive. If the forces, such as friction, dissipate energy, then work is negative.
Drawing the free body diagram: 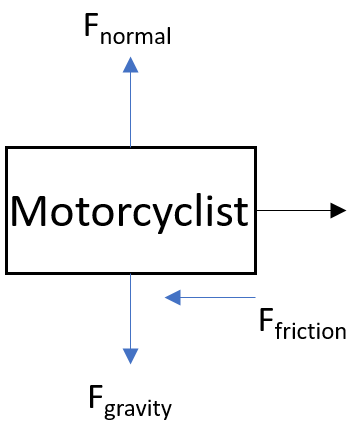