Consider you’re at an arcade, about to start a new game at the pinball machine. To launch the 0.25 kg pinball, you compress the spring 10 cm via the hand lever. After releasing the lever, the pinball launches and the game begins. What is the pinball’s velocity after travelling 5 cm if the spring’s stiffness is 25 N/m?

Gravity is working against the pinball (slowing it down as the ball travels upwards after release), so energy is not conserved:
$$$T_2+V_2=T_1+V_1+U_{1 \to 2}$$$
where $$T$$ is the kinetic energy, $$V$$ is the potential energy, and $$U$$ is the work done by non-conservative forces in moving between state 1 and state 2. It’s important to track the algebraic sign of the work term. If the forces serve to increase the energy of the system, then work is positive. If the forces, such as friction, dissipate energy, then work is negative.
Drawing the free body diagram: 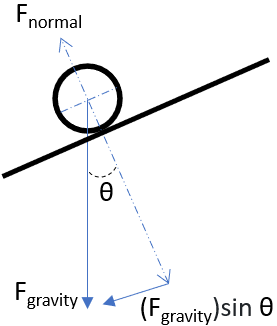